Learn more about the life of dragons

Join the bestselling author and illustrator of the wildly popular Viking adventure series, How to Train Your Dragon. Cowell grew up in London and on a small island off the west coast of Scotland. She was convinced that there were dragons living on the island, and has been fascinated by these mythical creatures ever since. She has written and illustrated 12 books in the popular Hiccup series. The unique blend of child-centred humour and sublime prose made Hiccup an instant hit and the series is now published in 38 languages. The DreamWorks Animation feature films have received both Oscar and BAFTA nominations. Her new series, The Wizards of Once, publishes this autumn and has also been signed by DreamWorks.

8+
Free but ticketed
This event has taken place 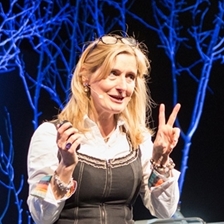