From the award-winning poet and playwright behind Barber Shop Chronicles, The Half God of Rainfall is an epic story and a lyrical exploration of pride, power and female revenge.

There is something about Demi. When this boy is angry, rain clouds gather. When he cries, rivers burst their banks and the first time he takes a shot on a basketball court, the deities of the land take note.

His mother, Modupe, looks on with a mixture of pride and worry. From close encounters, she knows Gods often act like men: the same fragile egos, the same unpredictable fury and the same sense of entitlement to the bodies of mortals.

She will sacrifice everything to protect her son, but she knows the Gods will one day tire of sports fans, their fickle allegiances and misdirected prayers. When that moment comes, it won’t matter how special he is. Only the women in Demi’s life, the mothers, daughters and Goddesses, will stand between him and a lightning bolt.

Buy a copy, or borrow it from your local library. Please check opening times and availabilities in advance. It’s available to download from your regular e-booksellers.

Further reading: “In the UK black men were thought of as animalistic” - Guardian interview

Price: £10.00
About Inua Ellams:
The poet, playwright, performer and designer is one of the most celebrated contemporary creators in the UK for the wide-ranging nature of his work. He is a member of the Royal Society of Literature and an ambassador for the Ministry of Stories, an organisation that fosters the potential of 8- to 18-year-olds as writers. After publishing four poetry books and receiving the Fringe First Prize at the Edinburgh International Theatre Festival for his first play The 14th Tale, Ellams sold out his run at the National Theatre and on the world tour with Barber Shop Chronicles. His verse play The Half God of Rainfall, a work in verse that mixes Greek, Nigerian and basketball mythology, opened in March 2019 to great critical acclaim. In December 2019 the National Theatre presented his breathtaking Chekov adaptation, Three Sisters, set in the Biafran war. In addition to his intense graphic and literary output, Ellams has founded The Midnight Run, an urban tour from dusk to dawn, and RAP parties that combine poetry slam with urban music. 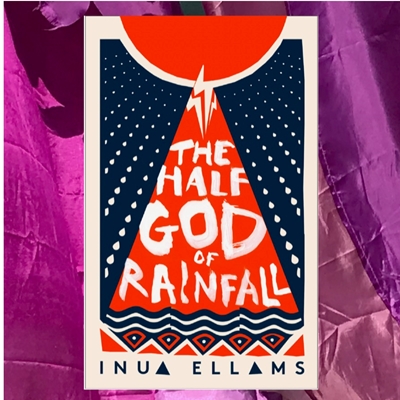