The latest novel by the journalist and political analyst Nativel Preciado is an ode to nature, to the lessons it teaches us, to the African continent and to the elephants, for which she feels a great love. El silencio de los elefantes rose with the Azorín Novel Prize in its latest edition. ABC, Interviú , Tiempo are some of the printed medi in which she has developed her journalistic career, which also has a long trajectory in radio and television. She is currently a collaborator at Los Desayunos de TVE and El debate de La I, in public television, and in Al rojo vivo or La Sexta Noche at La Sexta. Her first literary publications are part of the memoir genre, but later on she has been more inclined towards the novel. With her first novel, El egoísta, she was shortlisted for the Planeta Prize. She then published Bodas de plata, Llegó el tiempo de las cerezas, Canta solo para mí (Fernando Lara Prize) or El Nobel y la corista.

Nativel Preciado will talk to Javier Ors, head of Culture at La Razón. 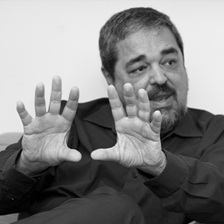