Blood Red Road, the first part of Moira Young’s famous Dustlands trilogy, has been described as ‘The Hunger Games meets The Road’ and has won numerous awards including the Costa Children’s Book Award and the Cybils Award for Fantasy and Science Fiction. It is being developed for film by Ridley Scott. Moira is joined by Paul Magrs, who has written a number of critically acclaimed stand-alone YA novels including Exchange and Diary of a Dr Who Addict. With the scale and scope of the great science fiction epics, his new novel Lost on Mars tells the story of Lora and her family, third generation human settlers on the red planet living in increasingly bleak and hostile circumstances.

Paul was a lecturer in Creative Writing at the University of East Anglia, running their famous MA course; while Moira was a comedian and then an opera singer before she became a writer. Join them for a wide-ranging conversation about their lives, their writing and whether they are true science fiction geeks.
12+ years/YA 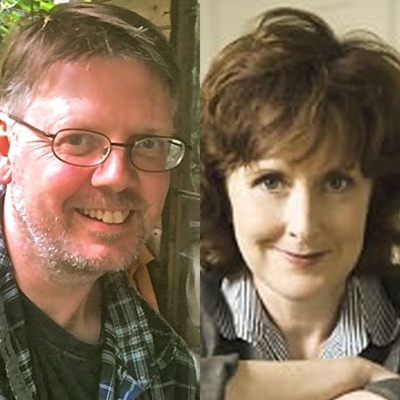