The Hay Festival has been organizing a full day’s festival in Riohacha since 2008, bringing many Colombian and international figures to the city. 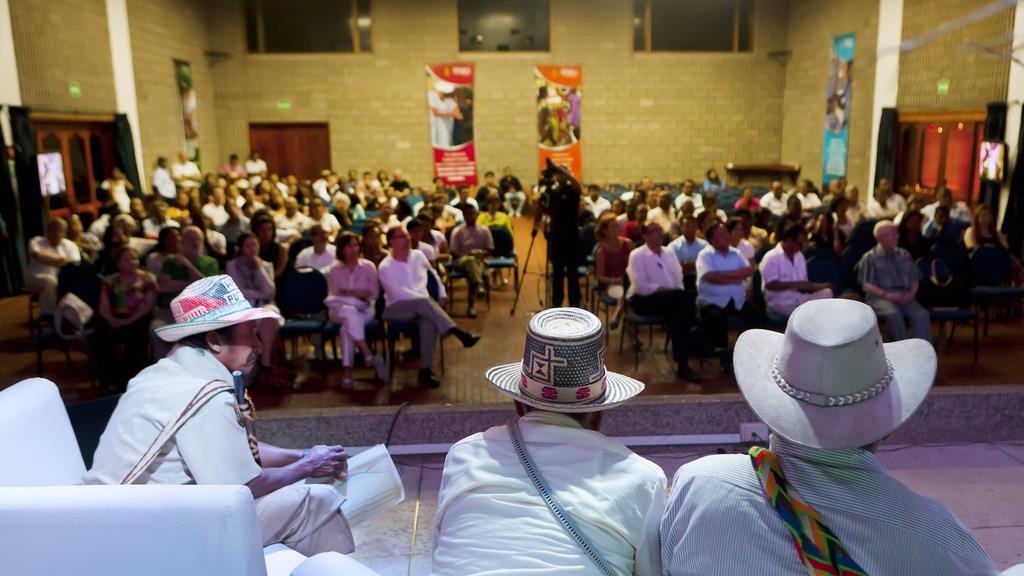 This year the festival took place on 24th January 2018 at the Biblioteca Monseñor Hector Salah and featured participants such as the writers Ana Alonso, Natalia Borges, Juan Cárdenas, Giuseppe Caputo, Martín Felipe Castagnet and others.

Thanks to the support of PROMIGAS, Cerrejón and Banco de la República, activities were also carried out in the municipalities of Uribia, Manaure and El Molino.

(Every event was free for all, up to capacity)

The upcoming edition of Hay Cartagena will be held between the 31st January and the 3rd of February 2019. You can have a look at the Hay Cartagena Rioacha 2018 programme here:

HFR1 10:00 – 11:00 h Manaure, La GuajiraAna Alonso Ana Alonso is a Spanish writer and poet with a degree in Biology. She is known for her children and youth literature works, such as the Pizca de Sal collection or other works like La casa de muñecas and Los instantes perfectos. Together with Javier Pelegrín she published the science fiction and fantasy saga La llave del tiempo (Anaya) and other series such as Tatuaje, Yinn, Odio el Rosa and La reina de Cristal. She will talk about what makes a literary character feel as alive and real as ourselves.For children 5+ With the support of Acción Cultural Española. Foco Cultura España-Colombia

HFR3 10:00 – 11:00 h Uribia, La GuajiraOlga de Dios  De Dios is a children´s book author and illustrator who transmits values of solidarity and divulges realities for which there are generally no references during childhood, such as the diversity of ways to love and be loves, gender equality or reponsible consumption. His book Monstruo Rosa is used in many pre-school education centers to work around diversity. During her talks, she usually tells a story, talks about her job as an illustrator and directs a drawing session focused on talking of diversity as something enriching.For children 3+With the support of Acción Cultural Española. Foco Cultura España-Colombia

HFR2 11:00 – 12:00 h El Molino, La GuajiraJuan Cárdenas Juan Cárdenas (Colombia) is the author of the novels Zumbido, Los estratos (winner of the VI Premio Otras Voces Otros Ámbitos en 2014), Ornamento, Tú y yo, una novelita rusa and in 2017, El diablo de las provincias. Currently, he is a coordinator of the Master´s Degree on Creative Writing in the Instituto Caro y Cuervo, where he works as a teacher and researcher. After living in Spain between 1998 and 2014, he currently lives in Bogotá, where he works as a literary critic and art curator.

HFR4 14:30 – 15:00 h Biblioteca Monseñor Hector Salah, Riohacha, La GuajiraBeatriz Helena Robledo in conversation with Edgar FerruchoThe latest book by Beatriz Helena Robledo, María Cano: La Virgen Roja, portrays the life of a woman of libertarian spirit and who was ahead of her time –the 1920s, with its climate of revolution and protest– yet who was also a leader. Robledo is a fiction and essay writer and lectures at the Universidad Javeriana. With this biography, she leaves children’s and young adult literature to show us a woman and a period full of contradictions, where the first signs of progress were accompanied by political sectarianism and violence.

HFR6 17:30 – 18:30 h Biblioteca Monseñor Héctor SalahIgnacio del Castillo Cottin in conversation with Sergio Dahbar When Ignacio Castillo Cottin drew up the budget for filming El Inca, he had to bear in mind that in Venezuela the prices of certain things, food for example, go up every week. However, the challenges of this film, the tragic love story of the world champion boxer Edwin Valero, did not end there since a judge banned the film in the country after a legal challenge presented by the Valero family. Apart from this, the film, nominated for an Oscar, has been a success. This film’s plot and characters breathe intensity.