In his debut collection, Caleb Femi combines poetry and original photography to explore the trials, tribulations, dreams and joys of young Black boys in twenty-first century Peckham.
Poor contemplates the ways in which the South London youth are informed by the built environment of concrete walls and gentrifying neighbourhoods that form their stage. Caleb writes a coded, near-mythical history of the personalities and sagas of his childhood community, and pays tribute to the rappers and artists who spoke to their lives.
What is it like to grow up in a place where the same police officer who told your primary school class they were special stops and searches you at 13 because 'you fit the description of a man' - and where it is possible to walk two and a half miles through an estate of 1,444 homes without ever touching the ground?
About the speaker:
Caleb Femi is a poet and director featured in the Dazed 100 list of the next generation shaping youth culture. He has written and directed short films commissioned by the BBC and Channel 4 and poems by the Tate Modern, The Royal Society for Literature, St Paul's Cathedral, the BBC, the Guardian and many more. Between 2016-2018, Caleb was the Young People’s Laureate for London. He wrote the liner material for Kano’s 2019 album, ‘Hoodies All Summer’ and was the face of the 2019 Mulberry Christmas advert. This is his first book.

​Max Porter’s first novel, Grief Is the Thing with Feathers won the Sunday Times/Peter, Fraser + Dunlop Young Writer of the Year, the International Dylan Thomas Prize, the Europese Literatuurprijs and the BAMB Readers’ Award and was shortlisted for the Guardian First Book Award and the Goldsmiths Prize. It has been sold in twenty-nine territories. Complicité and Wayward’s production of Grief Is the Thing with Feathers directed by Enda Walsh and starring Cillian Murphy opened in Dublin in March 2018. Max lives in Bath with his family. 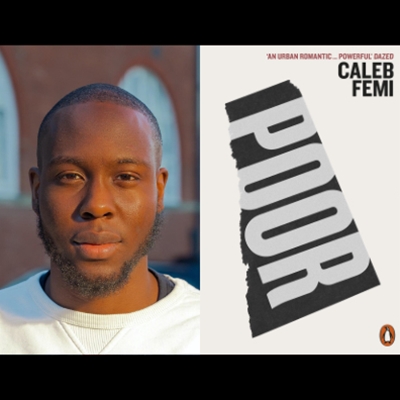