Finding the Mother Tree: Discovering the Wisdom of the Forest

​'This is not a book about how we can save the trees. This is a book about how the trees might save us'
No one has done more to transform our understanding of trees than Professor Suzanne Simard. She was the scientist who discovered that every tree in a forest is linked by underground fungi, allowing them to communicate and build communities around powerful, nurturing Mother Trees.
Today her work is taken as scientific orthodoxy and has inspired countless researchers, writers, and filmmakers, including James Cameron, Robert Macfarlane and Richard Powers, who based a character on Simard in his Pulitzer Prize-winning novel The Overstory.
But people didn’t always listen. Despite her ground-breaking discoveries, she was initially dismissed by the male-dominated scientific establishment of the day. It would be years until the world took her ideas seriously: in 1997, a landmark paper in the journal Nature coined the term Wood Wide Web to describe her work, marking the dawn of a new era of ecological awareness.
Now, for the first time, Suzanne Simard tells her own story, in her own words, bringing us into the world of Mother Trees that enable our survival.

Suzanne Simard is a professor in the Department of Forest and Conservation Sciences and teaches at the University of British Columbia and Finding the Mother Tree is her first book.

She is in conversation with Patrick Goymer, Chief Editor of Nature Ecology and Evolution. 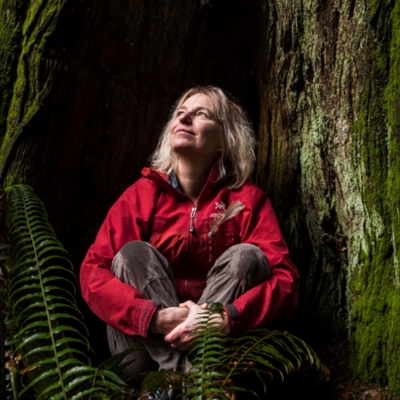 In partnership with Nature Portfolio