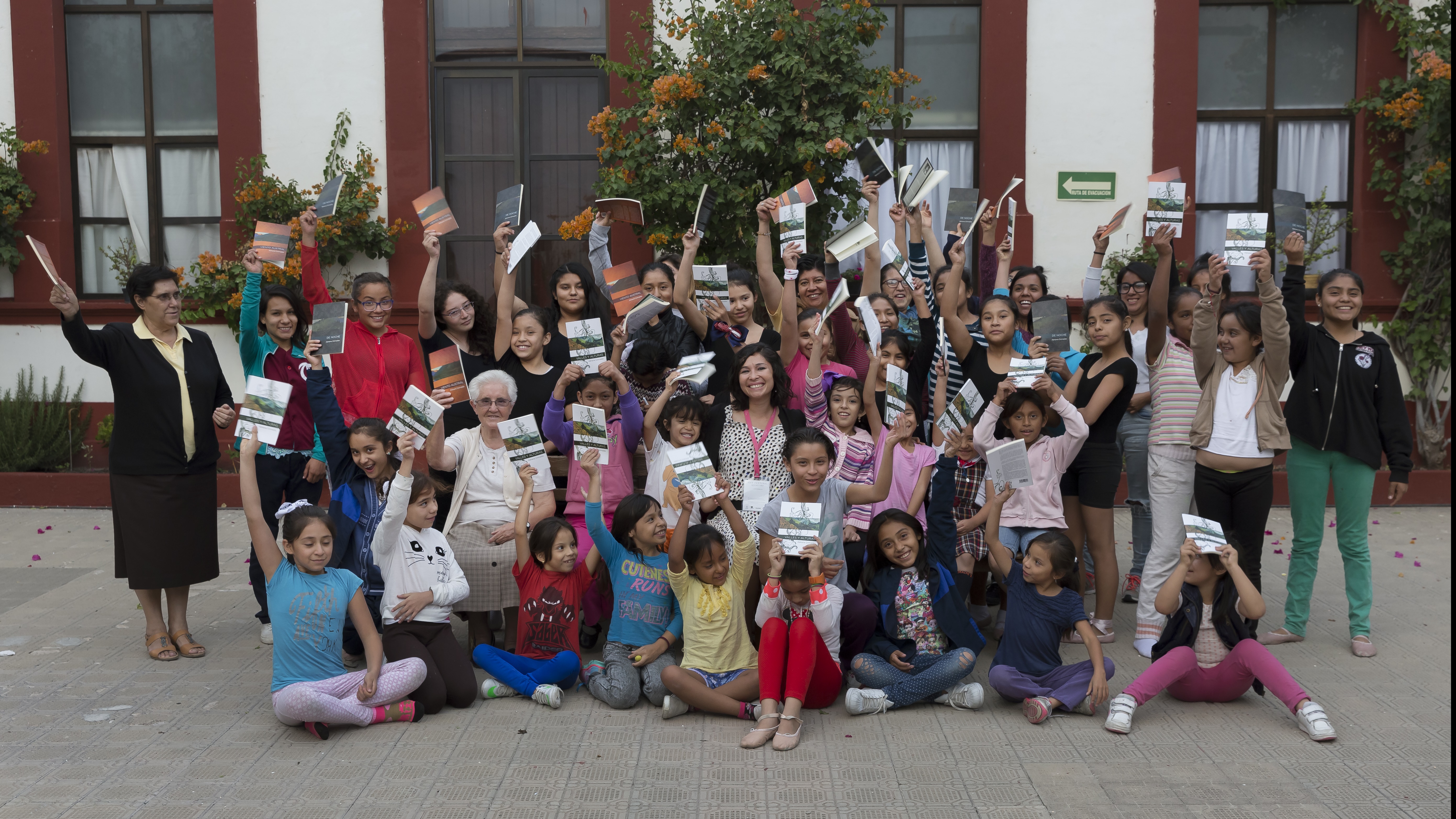 Thanks to the international agreement between the Welsh Government and the Hay Festival, we are pleased to present the Cineteca Rosalío Solano - Llwyfan Cymru – Wales Stage. From this stage, the public can enjoy face-to-face activities during the four days of the festival, with some of those event shared digitally, via streaming, on our website.

Discover Wale’s rich culture and history. From world-famous arts to jaw-dropping scenery. It all comes with a legendary warm welcome.

SURA, Hay Festival Ally for Latin America continues to support the Festival. On this occasion, they co-organise the conversations with the Nobel Prize winner Tawakkol Karman (Yemen), in conversation with Alexandra Haas, alongside Marta Peirano, a Spanish journalist and researcher specializing in the relationship between technology and power, in conversation with Olivia Zeron.

Dow, a partner of Hay Festival Querétaro 2022, is consolidating its support for the event, helping us to make it more sustainable by measuring and neutralising our carbon footprint and thereby promoting a Festival that is all about protecting the planet. In addition, this year, in alliance with our main partner, the Municipality of Querétaro, Dow and its allies will be repainting public cycle routes in the city with durable, low-emission road marking technologies, which will allow cyclists to attend Hay comfortably and without generating greater impact on the environment, and will also benefit the community in general, facilitating the safe use of this valuable means of transport throughout the year.

Acción Cultural Española (AC/E) is a Spanish public body dedicated to promoting Spain’s culture and heritage, inside and outside the country, through an extensive programme of activities. This includes exhibitions, meetings, conferences, film, theatre, music, audio-visual productions, and initiatives that boost the mobility of professionals and artists. As part of the promotion of the internationalization and mobility of Spanish literary professionals, AC/E collaborates with the Hay Festivals held around the world, co-organizing activities for the promotion and dissemination abroad of the work of Spanish writers. Hay Festival Querétaro 2022 will gather a number of talented Spanish artists: Bibiana Candia, Carlos Briones and Lucía Lijtmaer.

Hay Festival and British Council launched a global partnership at the 2010 Hay-on-Wye Festival - deepening their joint work since the birth of Hay Festival Cartagena - and have since worked together to bring UK writers and thinkers to global audiences. The British Council's literature team promotes British publishers, poets and writers in different communities and audiences around the world, developing innovative and high-quality events that weave connections between writers, publishers and cultural institutions. British authors of Hay Festival Querétaro 2022 will have the support of the British Council, in order to ensure that the knowledge and experience of the United Kingdom in the field of literature are recognized and appreciated by different Mexican audiences. These are the British authors who will be at the festival: Jarvis Cocker, Natalie Haynes and Caitlin Moran. In addition, the British Council supports the organization of this activity: Equity Series: technology. Yásnaya Elena Aguilar, Emma Graham-Harrison, and Marta Peirano in conversation with Ana Pais.

To accompany the programmes of the Hispanic festivals, expanding their scope through the use of digital tools, Hay Festival has teamed up with BBC Mundo for the preparation of a supplementary online programme in which Hay Festival Querétaro guests and other major figures in the world of European and American culture talk about current affairs, offer suggestions for books to read and authors they admire, and share their views on specific subjects. Readers can also find notes of interest and test their knowledge of literature and the Spanish language.

This digital programme, with exclusive online videos, texts, images and conversations, was broadcasted on the website and social media of BBC Mundo and Hay Festival.

Hay Festival and El País have established a media alliance for all the festivals in Latin America, bringing the festival to the readers of the newspaper, and the interviews and investigations of the newspaper to the spectators of the festival. The newspaper will feature a talk at each festival with a great international personality, and both organizations will share content to bring the Hay Festival closer to the readers of El País. This time the celebrated Spanish writer Rosa Montero will be interviewed by the director of El País México, Jan Martínez Ahrens.

The Wild Detectives and the Hay Festival join forces once more to create one of the most interesting literary and cultural events in the city of Dallas. Hay Forum Dallas celebrates its fifth edition in September 2022 with the participation of journalists Alma Guillermoprieto, Marta Peirano and Jospeh Zárate, and the writers Yásnaya Elena Aguilar, Carlos Manuel Álvarez and Jeremías Gamboa. The speakers will participate in activities in the Forum on September 3 and 4, and they will offer activities for university students at South Methodist University, University of North Texas at Arlington and University of Texas at Dallas.

The Eccles Centre for American Studies

The Eccles Centre & Hay Festival Writer's Award is an annual award of £20,000 for a current writing project exploring the Americas. Sponsored by the Eccles Centre for American Studies at the British Library, the Writer’s Award is run in partnership with Hay Festival. The award is open to writers working on full-length non-fiction or fiction books, in English or Spanish that require research use of the British Library’s Americas collections. This year’s call is now open. Hay Festival, the not-for-profit event series with editions across the Americas, is pleased to support the award in reaching the widest possible audiences, profiling winners at its festivals around the world. In this edition they support the talk Narrating the People. Iris Calderón and Benjamín Kumantuk Xuxpë in conversation with Isela Xospa.

Hay Diálogos con Cuadernos Hispanoamericanos aims to favour the knowledge and exchange between authors of different generations and nationalities who are united by the same language and a shared literary tradition which is enriched by authors of different origins. This proposal which will be developed in each and every one of the existing Hay Festivals consists of the participation of an acclaimed author, who will nominate a younger author from Latin America or Spain (the Spanish authors must pick a Latin American author and vice versa). This is, thus, a dialogue that builds bridges between different generations and countries, with one branch of literature, that is, Spanish literature, acting as a link. In this edition, the Mexican writer Clyo Mendoza, author of the celebrated novels Furia and Rosa Montero, an accomplished Spanish writer, talks with Irma Gallo.

Talento Editorial meetings are professional and international events open to the public, with the aim to know new and successful experiences in the publishing industry. Spaces in which booksellers, publishers and people from the sector exchange ideas and reflect together. Last year this sector suffered -or enjoyed- an extraordinary revolution, which has affected its economic and creative foundations. The thirteenth edition of Talento Editorial invites you to analyse irreversible cultural change.

The National Autonomous University of Mexico (UNAM) is the largest public university in Latin America, with excellence in academia and research, and an established and well-known cultural program. Together with the Hay Festival Querétaro, both entities establish a collaborative bond to bring the content of the Hay Festival Querétaro (1-4 September 2022) closer to an audience of students, through the assistance of guests (as detailed below) to the festival, who in turn will carry out activities at UNAM: Rosa Montero, Antonio Martinez Ron, Carlos Briones, Vivian Gornick and Cristina Rivera Garza.

In addition, the Monsters activity will be organised with Paola Llamas Dinero and Nadia Ñuu Savi in ​​conversation with Brenda Lozano and Gabriela Jauregui, which celebrates the Libros UNAM’s publication of this anthology.

These activities will be broadcast simultaneously on the University’s social media accounts and the Hay Festival Website (pre-recorded or live).

Hay Festivalito's programme, aimed at children and young adults, and the Hay Delegaciones programme are carried out in collaboration with the Querétaro civil associations LEO, Zorro Rojo, Villa Infantil Sonríe, En el semáforo se aprende and La Otra Banda, bringing the festival closer to the young and the old in the seven delegations of the city and intends to bring a cultural and educational richness of the program and to its participants from the most vulnerable areas of the city.